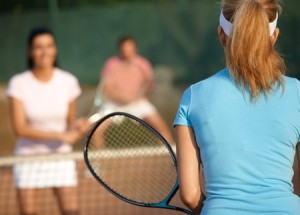 Tendinitis, also known as tendonitis, is an acute, sudden onset pain in tendons, due to inflammation. Unlike tendinosis, which is a longer term problem and requires different treatment, tendinitis usually develops suddenly, is typically localized, and most often is related to injury or overuse.

Having tendinitis can make you a prime candidate for acupuncture for sports injuries. Let’s take a look at the causes, symptoms and options for treating tendinitis in more detail.

Where Can You Get Tendinitis?

Theoretically, you can get tendinitis in any joint where you have a tendon, but there are a few common locations. Many common sports injuries are incidents of tendinitis that have been named for the joint affected, including:

These conditions can happen to anyone at any time, but due to the loss of elasticity associated with age, they are more common in older people. It is also often the result of repetitive motion – which explains the connection to sports and the condition’s reputation as a sporting injury.

It is not uncommon for people who have never played a particular sport to be afflicted with the tendinitis associated with it. For instance, housewives who never play tennis could very well develop tennis elbow from performing housework! Certain diseases, including diabetes and rheumatoid arthritis, can also increase the risk of tendinitis.

When a doctor suspects that tendinitis may be the cause of pain, he or she usually orders an x-ray to confirm whether there is a telltale deposit of calcium near the tendon. This is almost always a sign that the injury and pain is the result of repetitive strain on the tendon.

They may also listen for a creaking sound, or order a variety of other tests or scans. Once confirmed, traditional tendinitis treatment includes:

It is especially important to avoid using the affected joint while these treatments are being used, as continued use will only exacerbate the problem and prolong the condition.

Acupuncture for sports injuries is also widely accepted and practiced in the treatment of various types of tendinitis, even in athletes participating and competing at high levels of sports.

When you’re weighing the benefits of acupuncture in treating tendinitis, it’s important to consider these proven facts about acupuncture:

Whether you choose to use acupuncture as a supplement to treating tendinitis or not, it is important to seek medical treatment as soon as possible if you suspect that you have developed this type of injury. While waiting for a diagnosis, you should also avoid the use of the affected joint or joints as far as possible.

Left untreated, tendinitis can cause swelling and eventual tendon rupture, which can result in infection and other complications. If your tendinitis progresses this way, surgery or emergency medical care might become necessary.

Fill out my online form.